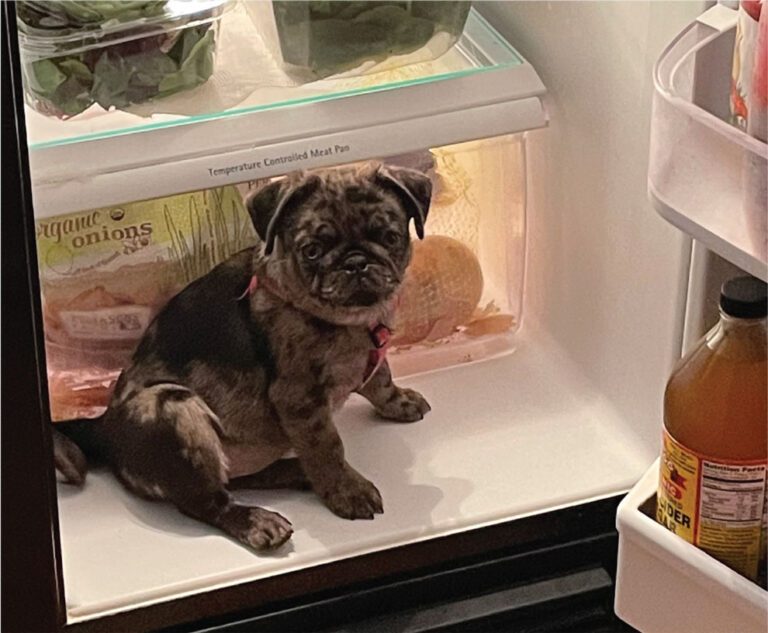 My wife had been “suggesting” we get a dog for a long time. Our last dog passed away more than 20 years ago, and with my traveling, I didn’t want to have another. But this year I relented, and it took Diane only four days before “Snickers,” a female blue merle pug, joined us.

Not being an animal trainer, I have been trying to use my supervisory skills with Snickers. I thought those skills might be appropriate. This chronicles some of what I found.

New hires are greatly influenced by what happens to them on the first day of the job. Large corporations offer a few hours to a few days of employee orientation. You may remember your own company orientation.

I recall my first week as an underwriter trainee. I was feeling good that I had finally found a job, and a good one, too. I was feeling triumphant and leaned back in my chair in an “I’ve-finally-made-it” moment. It was short lived. The new guy, who was me, got the oldest and worst office furniture in the office. When I leaned back, my chair just kept going until it went over backwards and I ended up falling to the floor, feeling not quite so triumphant.

That incident shaped my attitude.

The first day we brought Snickers home, she wandered too close to the basement stairs and fell down about two-thirds of the way to the basement. Fortunately, the stairs are carpeted and she seemed uninjured, but to this day, she doesn’t “do stairs.” Our “new employee orientation” was a flop.

I have known for a long time that a new hire actually reduces a team’s productivity for a few months. Read The Mythical Man-Month by Fred Brooks if you don’t believe me. A puppy not only reduced our productivity, but she also decreased our sleep and interrupted our meals.

Whether it’s feeding the puppy or “feeding” information to the new hire, either one can take a big toll on time. Starting a schedule helps, but there still are those unforeseen issues that come up — the puppy eats something she is not supposed to or the new hire fails to follow a procedure. A puppy will demand all of your attention while she is awake, which is worse than a new hire.

When I had new hires, I often scheduled short (15 minutes) daily meetings with them to ask questions and otherwise discuss what was going on with their projects. Rather than interrupting me frequently during the day, they saved their questions for this meeting. Oftentimes, they found answers to their questions before we met, saving me time and instilling in them the skill of finding answers on their own.

Snickers is now on a schedule, but she still has occasions when she wants to go outside when it isn’t on the schedule.

We learned that Snickers will sometimes misbehave when she wants our attention. I firmly believe some of my employees did that as well. It would happen when they didn’t get the “minimum daily requirement” of attention from their supervisor or colleagues.

Snickers loves to chew on things. Not just puppy toys and chewy things we buy, but the handles on our kitchen drawers, the corners in our kitchen, the exposed wood on our deck, and just about anything we think would taste terrible. The pet store said to give her something to chew on when that happens, that is, replace the focus of her chewing. But sometimes, she doesn’t make the exchange. Then we place her in a playpen. Now we think sometimes she wants to go to her playpen and misbehaves because that is how she gets there — possibly a consequence unintended on our part.

Sometimes a new employee will pick up a bad habit that isn’t acceptable. I have had more than one employee who would interrupt people, essentially letting them know why the speakers’ ideas should be scrapped and that they had a better idea. Like chewing on the kitchen drawer handles, it was annoying and disruptive. I “gave them something else to do” (besides interrupting), by suggesting they write up their ideas and present them to me later — that way we’d have it in writing, they would get the credit and it wouldn’t offend the person speaking. Without an audience, they usually decided not to pursue their position with a memo.

Housebreaking has radically changed since our last puppy. In the old days, when the puppy  “had an accident” in the house, you were supposed to rub her nose in it, say “bad dog” and put her outside. That didn’t seem to work for us with our previous pets. Today’s training philosophy is, if that happens, you almost ignore it. You certainly don’t rub her nose in it, but you do take her outside immediately. When she does “go” outside, they recommended that you give her a treat. The old method reminds me of “management by exception.” The supervisor wouldn’t say anything if everything is okay, but takes action if things are not. Which came first, the current method of housebreaking a dog or training employees, I couldn’t say.

I “gave them something else to do” (besides interrupting), by suggesting they write up their ideas and present them to me later — that way we’d have it in writing, they would get the credit and it wouldn’t offend the person speaking.

The new housebreaking style and getting her to stop chewing things got us discussing “Who is training whom?” If Snickers doesn’t get enough attention, sometimes she will misbehave just to get us to place her in her playpen, especially if there is something in it she wants to play with or chew.

I wonder how I would have approached being a supervisor if I were to think about how my subordinates were training me.

Early habits are hard to break, so correcting a puppy or a new hire is essential. When we first got her, Snickers liked to get into the refrigerator when we opened it and sit on the bottom of the opening. We thought it was cute. At first! Now it is a nuisance, but the habit has been formed. Ignoring the frequent late arrival of a new hire can have similar consequences.

Regardless, we have to monitor Snickers more now than we will when she learns the rules (if she does), just like new employees require more monitoring than seasoned ones.

We learned that dogs have a vocabulary of about 165 words. I think “no” is so general that Snickers only thinks it is an interjection, not a command to “stop doing that.”

When I started one of my jobs, I was confused by the vocabulary: Words that were used in my prior company meant different things in the new one. I was involved in a number of confusing conversations until I started to ask, “What do you mean by (that word)?” Because my consulting involves different clients, I have tried to create a dictionary of their terms, so I won’t get caught up in a language issue. New hires might not even know that some of the terms used in the company differ from their customary meaning.

You may be able to come up with other parallels between supervising a new hire and a pet. But don’t let either pet or employee maintain a bad habit or you may end up with a pug in the refrigerator.