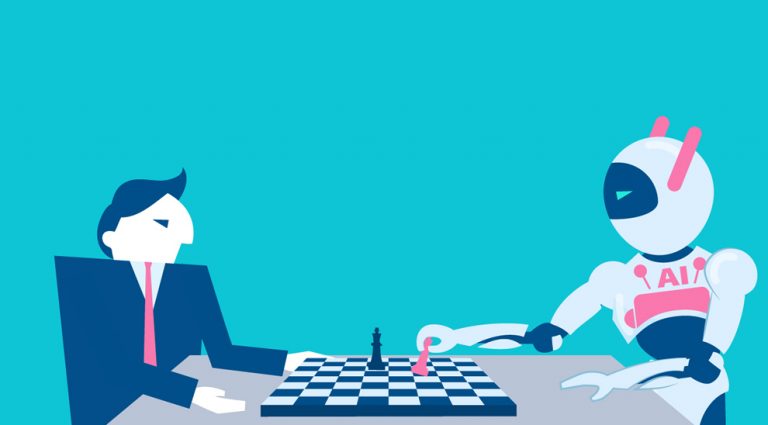 They were talking, at least it sounded to me as I considered it and went back through my notes, about what it means to be an actuary today.

That’s a topic a lot of us think about as our profession seems encroached upon by artificial intelligence (AI).

Once artificial intelligence, whatever it is, (Guszcza noted that the definition of AI is erratically drawn), gets cranking, it will be machines scrubbing, collating, analyzing and concluding — yes, telling us — what we humans should think.

As actuaries we have always assumed that to the greatest brain goes the truth. In actuary versus AI, it is AI that will always win. It is smarter. It is faster. It never sleeps.

Now chess should be the ultimate bummer in the battle of man versus machine. Watson beat Kasparov. Some time ago. By more than a little bit.

But the world of chess, Guszcza pointed out, has moved to a higher plane, above man, yes, but above machines, too.

The best chess in the world today is played not by a man and not by a machine, but by a team — a team of computers and people working together.

It’s called freestyle chess, though I’ve also read reference to it as centaur chess. Computers memorize and categorize thousands and thousands of moves and games. People apply soft skills — hard to describe but abundant and important. Together the computer and the human make a better team than either one on its own.

We’ve done such a good job of harnessing the machines that demand for the humans is running ahead of supply. What did we do right? We created systems that made our work more valuable.

If you think about it, that larger phenomenon — humans create a tool that outshines them, then harness and leverage it — is as old as invention itself. Humans tamed the equine, and a skilled horseman can outrace Usain Bolt. Speed began to depend on the skill of the trainer and rider, not on the physical prowess of the individual. Cars are faster and more powerful (in horsepower) than horses, so we had to learn to drive.

It is elsewhere too: The well-tended loom outproduces the most facile weaver. The steam drill outlasts John Henry. (The “steel-driving man” folk hero would beat the machine but dies from the stress.)

It is even in the actuarial world. Forty years ago, before the desktop computer, I’m told, actuaries worked in shifts. The early shift calculated estimates. The late shift double-checked the work.

All of those jobs were swept away by the computer, but the number of casualty actuaries keeps growing — from less than 1,000 in 1977 to nearly 8,000 today. We’ve done such a good job of harnessing the machines that demand for the humans is running ahead of supply.

What did we do right?

We created systems that made our work more valuable.

Take loss reserving for an example: We build several models to estimate ultimate losses (chain ladder, Bornhuetter-Ferguson, Cape Cod); learn the strengths and weaknesses of each; and use that knowledge in addition to everything else we know about the claims environment to select an estimate.

But if AI is fast approaching, knowledge of the model may become as outdated as dressage at the Indianapolis Speedway.

And we aren’t the only ones who will have to change. Good doctors, Guszcza said, excel at pattern recognition. Patients present a set of symptoms and doctors diagnose. They are, in their way, like old-fashioned chess players, learning a massive set of symptoms, illnesses and prescriptions and applying that knowledge deftly. But that skill will shrivel in importance in the age of Watson. Doctors will have to be good at something else, just as chess players had to add a new dimension to their play.

So what will actuaries be doing? Dave Ingram discussed actuaries becoming experts at systems analysis, reaching conclusions from understanding systems of models with complex interdependencies.

That’s a mouthful, I know. Think of an ecosystem as a web of interdependent actors (plants, animals, microbes, water, air, soil) and ecology as the study of that system. We’d be studying the system.

Ingram set forward systems analysis as the next step in how people go about making decisions. We started with gut decision-making, and as we got smarter and developed better tools, we got better at making decisions.

With that complexity, though, comes a big bonus, Ingram said: It shows how the system can break down. It shows what polluted water does to an estuary or what the extinction of an apex predator does to a valley. A well-designed system, he said, is like a window to the future.

And all the methods, just like actuarial models, have strengths and weaknesses.

The progression starts with gut logic (Ingram called it “Natural Decision Making”). It is pragmatic and reactive, he said. The gut decisions get better over time (a veteran underwriter is better than her junior partners) but are susceptible to bias.

Worse, it is hard to tell whether your instinctive behavior works. Sometimes your gut instinct works out, but only because you got lucky. And some people, he said, are lucky over a lifetime and leave this world thinking they had the magic touch.

Actuaries use gut logic, he said, when selecting a provision for adverse deviation on loss reserves. The selection in many cases comes from experience and instinct and little else.

A step up the ladder of reasoning takes us to Newtonian decision-making where actuaries tend to be more comfortable but, Ingram suggests, is the favored home of the chief financial officer.

Decisions follow the application of the scientific method or something close to it. It eliminates the subjectivity of pure instinct, which is an advantage, but it can be painstakingly slow. It also eliminates emotion completely, which can make solutions feel heartless and has the sort of shortcoming that freestyle chess addresses.

Another issue is that solutions focus on the expected value, a single point estimate, which is great if you want to book a loss reserve, but suboptimal if you want to understand how rickety that estimate is.

Statistical decision-making incorporates probability, and the answer includes a range of outcomes. Actuaries operate in this area (Bayesian statistics) but often use the statistical models as ways to come up with a single answer, only to abandon the valuable information about how robust the single answer is.

Statistical analysis doesn’t eliminate bias since it can be baked into assumptions. As Guszcza noted earlier, a model that used to mete out criminal sentences seemed to perpetuate racial biases.

One final challenge with statistical models is that some people are intimidated by complex answers.

Actuaries use all three systems — instinct, scientific method and statistical analysis — to a greater or lesser degree, Ingram said.

Tomorrow’s actuary may end up moving to the fourth tier of decision-making, the aforementioned systems analysis. We may soon be studying models that describe their own ecosystems.

These models are complex and often intimidating. A flow chart describing one “looks like a plate of spaghetti,” Guszcza said.

With that complexity, though, comes a big bonus, Ingram said: It shows how the system can break down. It shows what polluted water does to an estuary or what the extinction of an apex predator does to a valley. A well-designed system, he said, is like a window to the future, and the description of what might happen is a story. “Stories are very powerful,” said Ingram.

So actuaries would become storytellers: a sharp departure for professionals who are often frustrated by bosses who skip the data and focus on the narrative.

Here, though, the story is the answer.