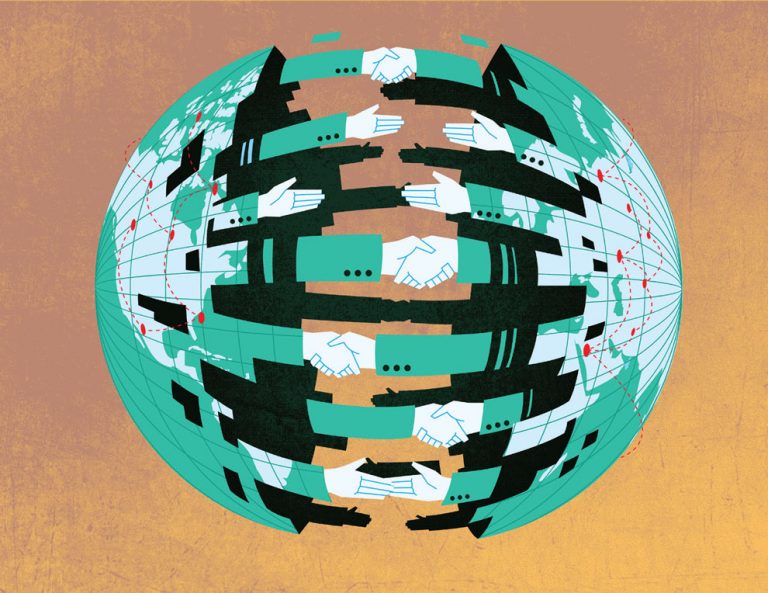 As its membership grows beyond North America, the CAS commits to building and strengthening its connections.

The Casualty Actuarial Society is undertaking an ambitious effort to provide more opportunities to international members while also encouraging the growth of the property-casualty actuarial profession worldwide. The CAS’s ambitions are made possible by about 150 volunteers who help in various capacities, from enhancing the organization’s international presence to encouraging college students outside North America to pursue careers as P&C actuaries.

One major priority is outreach to countries with developing P&C markets since the CAS’s membership composition is changing as the world becomes more connected. “We cannot consider the CAS a solely North American group,” said Kendra Felisky, FCAS, who is spearheading CAS’s international activities.

“A significant proportion of our future members are going to be coming from outside of North America and we need to pay attention to them,” added Felisky, vice president of international on the CAS Executive Council and chair of the International Leadership Group.

Currently, 94% of CAS members, including Fellows and Associates, are based in North America. Membership now comprises 82% from the United States, 12% from Canada and 6% from outside the North American continent. There is, however, a meaningful shift taking place in membership by location as membership outside North America rose 38% from 429 in 2015 to 591 in 2021.

Looking at the current number of candidates reveals the potential CAS member composition in the future: From 2015 to 2021 the number of CAS candidates in North America grew 15% — a quarter of the 60% increase from countries outside the continent.

More significant growth is taking place outside North America and Europe for at least a couple of reasons. “The world is developing more complex risks,” observed Bob Conger, who is a member of the CAS International Ambassador Program. He explained that the property-casualty industry is growing in different parts of the world where there are relatively few actuaries. Conger added that the international effort gives the CAS an opportunity to expand its presence, membership and role.

Striving for an Envisioned Future

The CAS Board of Directors prioritized the organization’s role worldwide. Its strategic plan, released in December 2020, highlights three pillars for the organization’s “Envisioned Future.” The pillar, “Expanding Globally,” is to ensure “the unique skill sets of CAS members are understood and valued worldwide by raising awareness of the CAS brand globally,” Felisky said.

The International Leadership Group crystalized when Felisky became vice president-international on the CAS Executive Council, Conger said. “She saw we were spending a lot of time collaborating with each other individually and thought we could do that as a group,” he said. “She was right! It has been quite effective and energizing.”

The group is pursuing multiple initiatives to bolster international participation. Felisky calls the International Member Services Task Force “the powerhouse that drives all our other initiatives.” (See sidebar.)

The International Leadership Group worked with staff to develop and logistically support the new Exam 6-International (6-I), which was administered for the first time in October 2021. Designed for candidates for whom the U.S. or Canadian regulations are not relevant, the exam covers international standards and regulations along with emerging areas of global practice.

Felisky calls the International Member Services Task Force “the powerhouse that drives all our other initiatives.”

CAS international volunteers are building relationships with regulators and employers to demonstrate the value of CAS credentials as essential for property-casualty actuarial work, Felisky said. Connecting with people in the regions means becoming acquainted with each country’s unique circumstances.

Members are also devoting themselves to university engagement for students, candidates and academics in Asian and Latin American countries, particularly where life and health actuaries or statisticians are serving in roles best filled by P&C actuaries. Felisky said that the effort includes working toward establishing connections with universities to encourage and bolster actuarial programs in P&C insurance.

Ron Kozlowski, the CAS’s Asia Ambassador, works in conjunction with Conger and focuses a lot of his energy on the region because Asia is experiencing the greatest expansion. “Employers and regulators are increasingly interested in the value that P&C actuaries bring to the table,” said Conger, adding that because the market is growing rapidly, the universities are awakening to the value of P&C education.

The greater demand for P&C actuarial talent is partly because most countries, except the U.S., use International Financial Reporting Standards (IFRS) to prepare financial statements. A new standard, IFRS 17, is speculated to cause a lot of disruption. “[IFRS 17] upends everything you knew about financial reporting for insurers and incorporates a lot of new actuarial calculations,” explained Kenny Tan, FCAS, who lives in Malaysia and serves on the CAS International Webinar and Malaysia Seminar Planning Task Forces. The standard, which was initially to take effect in 2021, has been pushed back to 2023.

Rate deregulation also explains the greater need for CAS-credentialed actuaries in Asia, said Tan, a Malaysian native who attended college, began his career and earned his CAS credentials in the United States. Five years ago, insurance regulators in Malaysia partially de-tariffed the auto insurance market to introduce competitive rating, Tan said. “I had experienced a free market in the U.S., but the Malaysian auto insurers are experiencing it for the first time,” he said. Like Tan, many CAS volunteers in Asian countries first worked in the United States.

“CAS people are more passionate,” said Tan, when he compared the CAS to other organizations for which he volunteers. “We have volunteers from China, Singapore and Hong Kong,” he said, adding that the CAS is not just a professional society, but that it offers unique expertise that members can share among each another. Conger confirmed that there are about 200 CAS Fellows and Associates living and working in Asia.

CAS volunteers in Asia often meet virtually and because the countries use many different languages, webinars and seminars are conducted in English. Tan said that there are cultural challenges also, explaining that people in Malaysia tend to shy away from public speaking. This hesitation makes it challenging to find speakers or to encourage conversations during meetings.

“The important thing here is that we now have a structure to oversee our dealings with the IAA,” Felisky explained. It is also important to carry the flag as the only exclusively P&C actuarial organization, she said.

The CAS has committed significant resources in China, where almost 9% of current CAS candidates reside, Felisky said. The investment includes hiring a full-time CAS staff member, Ran Guo, FCAS, who serves as China country manager. Based in Beijing, Guo’s work is critical for initiatives such as the CAS Boot Camp, which had more than 250 students this last year, he said.

The effort is essential because actuarial students in Asia often are being exposed to actuarial careers in life insurance, Conger said, and they might not be aware of options in the P&C industry. “[We want] to make sure that there are people in the room coming from the P&C perspective,” he said.

But there is still a long way to go before the P&C actuarial profession is as firmly established in Asia as it is in North America and Europe. The CAS has an advantage over other actuarial organizations that offer credentialing, Tan said, because the tests are specifically geared toward P&C insurance and are the most affordable.

There are similar challenges in Latin America, where the CAS sees promising growth potential. Employers also need to see the advantages of CAS-credentialed actuaries and better support candidates by providing resources and work time for studying as is customary in the United States, said Nicolás Vega, FCAS, who chairs the Latin America Regional Working Group. He sees his primary role as spreading the CAS brand and promoting actuarial science in the region.

Vega says that the development of the P&C actuarial profession varies by country in Latin America. Vega is one of the very few CAS-credentialed actuaries from Colombia. Few CAS-associated P&C actuaries work in Latin America, he said, adding that in Mexico, Brazil and Colombia there are local actuarial associations, but they are not fully focused on property-casualty insurance. Some countries have started to form actuarial groups, but others have not yet reached that stage.

In most Latin American countries, regulators appreciate the value of an actuarial opinion but also need to recognize the value of actuaries overall, especially credentialed actuaries, Vega said. There are also fewer insurance companies in the region. “The scale is different, but the needs are there,” he said. Each country has a CAS ambassador who represents the organization to students, candidates, members and the P&C market.

More volunteers are needed, Felisky said, especially those working in the countries where the CAS seeks to expand its presence. “Boots-on-the-ground” volunteers are the ones “we rely on the most,” she explained.

“[Volunteers] really inspire the rest of us,” said Conger. When he was CAS president about 20 years ago, Conger became interested in international outreach while attending the International Congress of Actuaries in Mexico. The insights and creativity he experienced at that event encouraged him to become more internationally involved.

Annmarie Geddes Baribeau has been covering insurance and actuarial topics for more than 30 years. Find her blog at www.insurancecommunicators.com.

For more information on how you can volunteer for the International Members Services Task Force or partake of its assistance, please write to IMSTF@casact.org. 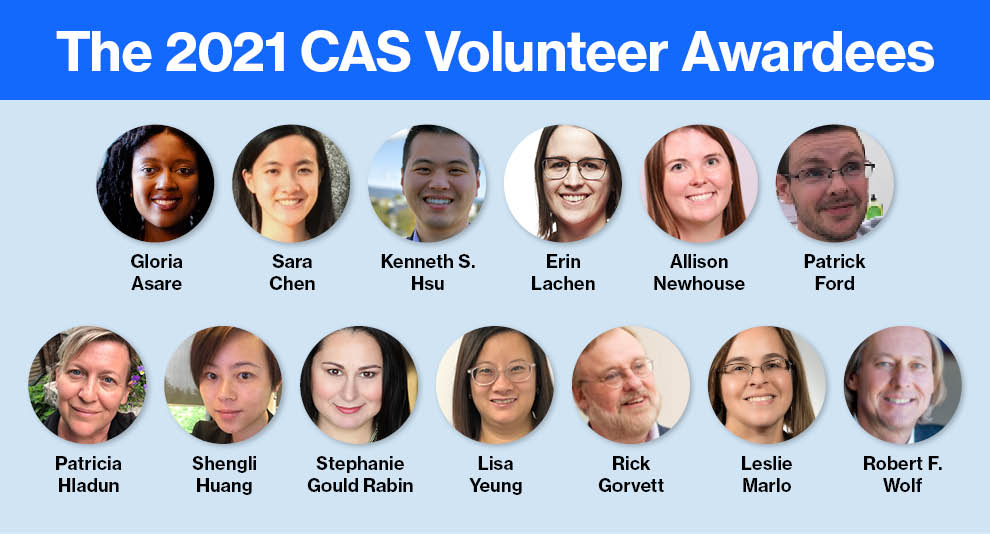