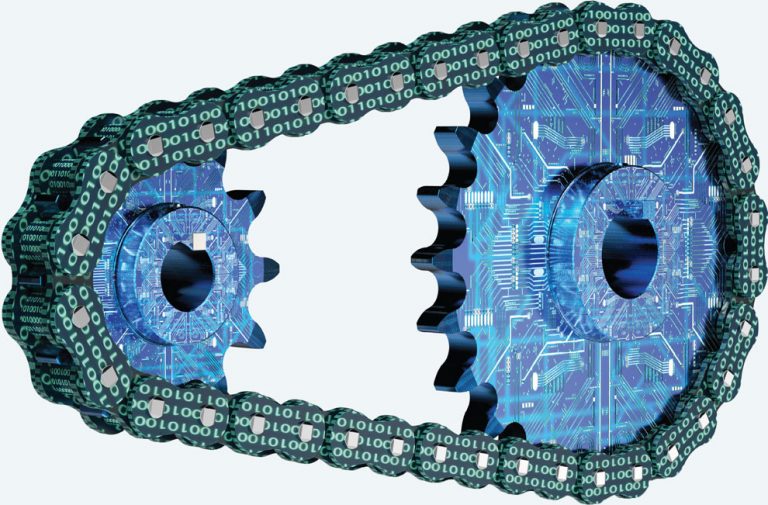 The modern-day insurance contract has its origins in 14th century Italy. Shipping merchants would obtain a loan to fund their trade; these loan contracts contained a conditional clause stating that, in the event of a shipwreck, the loan would be forgiven. This clause, and the overall loan structure itself, functioned as insurance and premium. As these contracts evolved, the conditional clause became a standalone contract: an insurance contract. This separation of the insurance and financing components allowed more efficient spreading of risk, increasing trade for many years to come.

Over the last 500 years, the insurance contract has grown in complexity, covering a large and diverse set of risks. However, for much of that time, and in many respects, the contract itself didn’t change much: a standardized form, written on paper, and describing a contractual relationship. Indeed, the majority of our institutions are built around static, paper-based forms, interpreted and enforced by human principals.

In the 20th century, with the development of computers, contracts have been digitized and shared via computer networks. Technology has allowed for standardized business transactions between organizations, using encryption protocols to secure them, akin to a digital signature. Yet, apart from encryption, these transactions represent a digitized version of the original static form, basically just an extension of the paper-based forms used for hundreds of years, and still enforced by human principals.

With innovations in technology, specifically computer protocols, it is now becoming possible to embed into digital contracts the ability to verify, enforce and execute contract terms — essentially creating a “smart contract.” This may seem somewhat farfetched, but smart contracts already exist in various simple guises, such as automated bill payment at banks or a purchase from a vending machine. In both examples, the contract clauses (automatic monthly bill payment or buying a snack, respectively) are executed by electronic protocols, without the direct participation of human principals.

The advent of digital (or crypto) currencies, of which Bitcoin is the best known, has opened up opportunities for more advanced digital contracts. Bitcoin uses the concept of a blockchain, which is an encrypted digital ledger, recording all transactions that have occurred for a specific Bitcoin since its inception. The protocols underlying the blockchain use a distributed peer-to-peer computer network to perform the functions of an intermediary, ensuring that transactions between parties are valid and trusted. Essentially, the blockchain protocols, through cryptography, eliminate the need for a centralized authority, such as a bank, by distributing that function across a computer network of disparate participants, not controlled by any one entity.

The blockchain is the technology underlying Bitcoin, and it is used to capture unique identifiers, protect sensitive data and store a digital payments audit trail. The blockchain is also flexible enough to be adopted by the insurance industry to digitally implement components of an insurance contract. In addition to collecting and storing information, blockchains can be expanded to store contractual clauses, relevant supporting documents, claims forms and invoices. The blockchain can also access third-party information and execute contractual clauses based on specific events. All information is encrypted, and the underlying protocols are intended to ensure that trust and verification are valid, potentially reducing fraud and lowering the costs of issuing and executing an insurance agreement between parties. In effect, the blockchain makes a smart insurance contract feasible.

Let me briefly mention two of the many interesting insurance applications of the blockchain: claims and reinsurance.

Claims handling costs should be significantly affected by the blockchain, through the potential reduction in errors, improvements in transparency and detection of possible fraudulent claims. Both insurance contract and associated claim information could be verified and reviewed using a trusted distributed network that groups of insurers participate in and operate. If multiple claims are made for one accident, all insurers will know of this, as they all have access to the same blockchain, virtually eliminating the potential for fraud.

In reinsurance, the blockchain is already having a dramatic impact. A large German-based reinsurer has successfully used the blockchain to issue catastrophe swaps and bonds. The blockchain helps automate the payments between insurers and investors, reducing payment transaction time. Another potential application is index-based reinsurance contracts: The blockchain can be used to build a smart contract whereby if an event triggers an agreed upon insurance index, a payment will automatically be made between the reinsurer and the insured.

The blockchain has the potential to revolutionize the insurance contract and market, and create opportunities for innovation. The first movers with the vision to seize these opportunities will likely reap the most rewards, in both increased market share and more streamlined and profitable operations.

Marco Baratta, FCAS, MAAA, CPCU, has been with Liberty Mutual Group since 2010, working in various actuarial roles in ratemaking, pricing and reserving for both personal and commercial lines. Prior to joining Liberty, he worked for over 10 years in senior engineering and management positions in the semiconductor industry.

For more on blockchain, check out these articles:

Rick Huckstep, “What Does the Future Hold for Block Chain and Insurance?,” 2016, https://dailyfintech.com/2016/01/14/what-does-the-future-hold-for-blockchain-and-insurance.